AN all-action display saw Loughinisland ladies secure victory from the jaws of defeat against favourites Clonduff in the Intermediate Championship to secure a 2-15 to 3-11 win at home last night.
At one point the Blues were nine points behind but a scintillating display in tough conditions saw them secure victory with just a point to spare.
This has been another developmental year for the girls in blue with up and coming minor girls joining the panel after some of last year’s panel unavailable through work, relocation and retirement.Bethan Carvill put in a powerhouse display where she scored 1-4 from midfield. 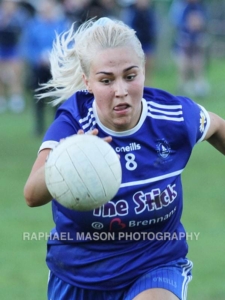 Bethan Carvill had an outstanding game for Loughinisland

However, she wasn’t alone in putting in an almost superhero performance.
Orlaith Cassidy scored 1-3 from the full forward line, Aine Smythput in a five-star show and pointed five times for the Blues.
Not to be outdone, Kirsten Jennings (0-2) and Emma Gordon chipped in with a point to help secure a memorable win. 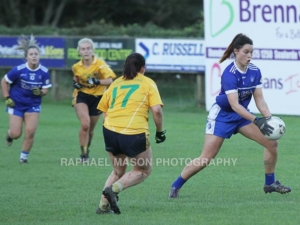 Clonduff dominated the game from the beginning with some well taken scores and led at the first half water break by four points.
The ‘Island defence was marshalled by new ‘keeper Rachel Murphy, who made some great saves.

The full back line of Megan Ferris, Sophie Brown and Maria Gilchrist had their work cut out for them trying to keep the ‘yellas’ at bay as Orla Mason, Caroline Kennedy and Jessica O’Hare worked tirelessly throughout with some great battles against a tough opposition.
The visitors went in at the short whistle leading by seven points with the scoreline at Loughinisland 1-8 Clonduff 3-9.
An inspirational team talk by manager Jim Carvill had the girls playing line a team possessed after the restart and they turned the game on its head.
The Blues’ midfield pairing of Bethan Carvill and Eimear Murray grabbed control of the game and linked up superbly with captain Emma Gordon leading the half forward line along with Aine Smyth and Emma Keenan. 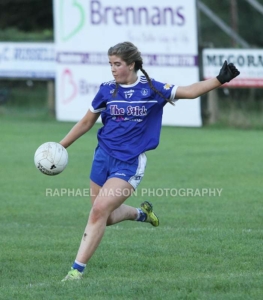 Kirsten Jennings on the ball

The full forward line of Orlaith Cassidy, Megan Jennings and Kirsten Jennings were constantly on the move looking to win every ball which fell near the Clonduff goal.
At the second half water break the Blues had reduced the deficit to five.
Loughinisland went up a gear during a scoring spree with some fine points from play from Aine Smyth, Kirsten Jennings and Bethan Carvill.
With the game finely in the balance and just over 10 minutes on the clock, Orlaith Cassidy rattled the back of the Clonduff net to make it a two-point game as the raucous crowd cheered on the home team.
The Blues had their tails up and took the game by the scruff of the neck with another three points to take the lead by the smallest of margins.
Aine Smyth converted a 13 metre free for Loughinisland to double their lead with just minutes left on the clock.
During a tense finale, Clonduff scored the final point of the game, taking paintwork of the crossbar on the way over but the home side held on to secure a fantastic win.
A fantastic performance from both teams with the players giving everything for their respective jerseys.
Player of the match: Bethan Carvill.
The Loughinisland girls can look forward to a trip to Burren next Saturday in the second round of Group 2 in the championship.
Well done on a terrific performance and thanks to Raphael Mason for some fantastic photos.