Barnstorming display by Loughinisland U-15 outfit

A SENSATIONAL team display saw Loughinisland sweep Aghaderg aside and comfortably march into the semi-finals of the U-15 Football Shield.

Tormentor-in-chief was James Savage, who scored a phenomenal 2-12, in a show of fantastic attacking play. He was in red-hot form and the Aghaderg defenders couldn’t cope with his range of passing, link-up play and he practically scored at will.

Almost half the team got on the scoresheet in what was an impressive performance from this Blues outfit as they led by 3-13 to 0-0 after 30 minutes as the home side ran rampant.

Lorcan Killen and Matthew McGlew scored 1-2, Callum Valentine notched up 1-1, Daniel Savage got two points with one coming from a free and sub Enda Gribben also got on the scoresheet with a superb fisted goal in the closing minutes. 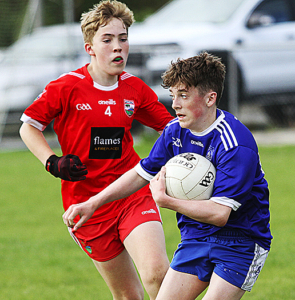 Loughinisland’s Daniel Savage won possession after the throw-in and fed James Savage to put the ball over the bar in the first minute.

James Savage got a goal a minute later before he lobbed the ball into Lorcan Killen, who fisted to the back of the net to leave the scores 2-1 to 0-0 after just three minutes.

James Savage then pointed from 30 metres before Odhran O’Prey was fouled in a three-man move involving Danial Savage and Callum Valentine. James Savage pointed the resultant free and he put the ball over the black spot from 35 metres in the seventh minute.

Callum Valentine pointed in the 10th minute to leave the scores 2-5 to 0-0 after 10 minutes.

Aghaderg’s midfield pairing of Aidan Muckian and Daniel Brown were beginning to work their way into the game but the Loughinisland rearguard superbly thrwated any incoming attacks.

Daniel Savage got on the scoresheet with a monster kick from 35 yards near the sideline. Callum Valentine was in on goal in the 14th minute but Aghaderg’s Ronan Sands superbly saved on the line to leave the scores 2-6 to 0-0 at the water break. 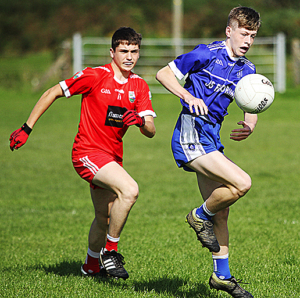 A great four-man move which involved midfielder Dan Smyth, Cormac Magorrian, Matthew McGlew before Magorrian got the return pass to slot over in the 18th minute. James Savage further added to the tally with another point just three minutes later and he fisted over the minute in the 22nd minute to put his side further in front.

Cormac Magorrian put the ball in the forward area to Matthew McGlew, who cleverly found Dan Smyth but Aghaderg’s Ronan Sands pulled off another fine save.

Aghaderg’s Daniel McKernan, Kevin Doyle, Cillian Muckian and Daniel Brown were beginning to find space in the middle of the park but wayward shooting from the visitors halted their chances to notch up a few scores.

Matthew McGlew then pointed in the 23rd minute from a fantastic counter-attack as Lorcan Killen added to his side’s tally with a well taken point.

Ruairi Barlow was then fouled in the 24th minute and that man James Savage scored again from a free one minute later.

Daniel Savage then found James Savage, he passed to Matthew McGlew – his fine effort was saved by Sands but Daniel collected the loose ball and pointed to leave the scores 3-13 to 0-0 at the short whistle.

The team talk from Aghaderg’s management trio of Gavin Brackenbury, Damien Simpson and Gerard Keenan got their side fired up for the second half and their side battled admirably to claw back the deficit.

Daniel Brown got Aghaderg’s first point in the 31st minute after some good support play from Fionntan Keenan. Brown had a free just seconds later but that sailed wide.

Loughinisland then settled again as Odhran O’Prey and James Savage combined before the latter found Lorcan Killen, who got his side’s first point in the second half.

James Savage notched up another point before a Loughinisland notched up their best score of the game.

Dan Smyth collected the ball in midfield, he found Ruairi Ballow, who sent a return pass to Smyth. Smyth threaded a neat pass to Odhran O’Prey, who quickly found the inrushing Callum Valentine, who smashed the ball to the back of the net.

Again Dan Smyth was at the heart of the action as he linked up with Valentine before Matthew McGlew pointed from a great three-man move.

Aghaderg’s Jay McLaughlin shot rattled the post and went into the top corner of the net to give his side their first goal in the 41st minute.

A superb 35-metre run from James Savage again a minute later put his side further in front, before Cian Simpson and Daniel Brown replied for the visitors to leave the scores 4-17 to 1-3 at the second water break.

Blues’ Savage duo of James and Daniel put further daylight between the sides by the 49th minute with a point apiece.

In a rollercoaster finish, Aghaderg corner forward Tiernan Hurley found the back of the net before James Savage got one back for the home side.

However, Aghaderg still battled away and scored two goals in quick succession from Fionntan Keenan and Daniel Brown as Loughinisland took their foot of the pedal and saw out a superb win.