A KERRY man has put pen to paper to “Mr Loughinisland” following a brief chat in Newcastle recently.

John Corcoran, from Listowel, was in the seaside town for a day trip with his friend when Vincent McGlew noticed the Kerry car registration while passing the pair who were leaving the vehicle.

The tourist was with his friend Sean Hamill, who is originally from Downpatrick, who was known to Vincent. Upon meeting the pair, the Loughinisland man said, “Would Kerry win the All-Ireland and how was Mick O’Dwyer keeping?”

Of course, Vincent was referring to the former Kerry manager who is regarded as the greatest manager in Gaelic football.

The GAA legend also took time to come to Loughinisland in 2016 as a guest of honour following the club’s celebrations after they won Ulster Club Football Championship and this prompted the query about the Kerry man’s health. 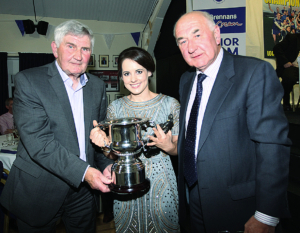 However, a week after that brief encounter in Newcastle last month, Mr Corcoran penned a delightful letter to Vincent saying he was “caught on the hop” by the enquiry about county’s former manager and told the Loughinisland man “that not only is ‘Micko’ still with us but he is indeed firing on all cylinders”.

Mr Corcoran also “did a bit of research” on “Mr Loughinisland” and was delighted to discover he was awarded the Irish News’ first-ever Volunteer Award at the newspaper’s volunteer awards ceremony in 2017 and duly congratulated Vincent on his achievement.

Vincent was somewhat delighted by the Kerry man’s kind gesture of writing a letter and was pleased to hear Mick was “firing on all cylinders”.

He replied to Mr Corcoran by letter thanking him for his kind words and to regale the tale a few years ago someone from the club was in contact with Maurice Fitzgerald – another legendary Kerry man.

Vincent told how how the three-time All-Ireland winner got in touch with Loughinisland after the Ulster club side were defeated by Holymount in the All-Ireland Club Championship semi-final and the Kerry club Mr Fitzgerald managed were due to face the same opposition in the final.

Vincent regaled how “whatever was discussed, it worked wonders, for St Mary’s won the final by five points”.

No matter where you are in Ireland, you’ll always come across someone else who is passionate about the GAA and it’s good to see north-south co-operation is going from strength to strength.