THE Gordon family are an inspiration for those who play Gaelic games after all six members of their family donned their boots for Loughinisland GAC at the weekend.

Dan starred for the senior men in their Senior Football Championship victory against Darragh Cross on Saturday.

Mum Emma turned on the style for the senior ladies where she scored a scintillating point from a tight angle near the corner flag.

Emma in action against Clonduff

Her experience as team captain was a crucial factor in helping clinch a one point championship victory against favourites Clonduff in an exciting game at home on Saturday night.

Sunday was the turn of the children. An U8 friendly against Teconnaught saw twins Cora and Cara work hard and enjoyed lots of possession. 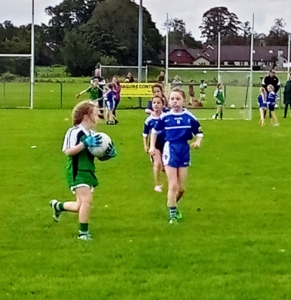 Baby of the house Ava didn’t let her young age hold her back and got stuck in with her tigerish tackling. The team is also managed by none other than Emma herself.

Then eldest daughter Grace, who has just finished primary school, played her first game at U14 level, as she turned in a fine performance and plenty of scores to help the girls secure their win over Downpatrick B. 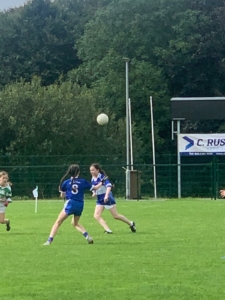 A successful weekend’s action for all the family in what must be a rare feat in any club!